Resolution of banks and creditor participation

Note on resolution of banks and creditor participation (bail-in)

In response to the 2008 financial crisis, many countries adopted regulations that will enable banks at risk of default to be resolved in an orderly manner without the need for help from taxpayers. This means that bank shareholders and creditors can be involved in their losses in the event of liquidation. The aim of these regulations is to enable banks to be resolved without using public funds.

To this end, the European Union has adopted the following acts:

The BRRD states, among other things, that each EU member state will set up a national resolution authority that has certain rights to resolve and recover credit institutions. These measures may have adverse effects on bank shareholders and creditors.

The exact nature of the measures at a national level that resolution authorities can take may vary in detail. In the following, we explain the possible resolution measures using Germany as an example. The resolution procedures of other countries, especially non-European countries, may also be different and even more substantial.

You might be affected as a shareholder or creditor of a bank, i.e. if you hold financial instruments issued by the bank (e.g. shares, bonds or certificates), or as a contractual partner of the bank if you have claims against the bank (e.g. individual transactions under a framework agreement for financial futures transactions).

Who is the resolution authority?

The Single Resolution Board (the SRB or Einheitlicher Abwicklungsausschuss in Germany) and the Federal Institute for Financial Services Supervision (Bundesanstalt für Finanzdienstleistungsaufsicht — BaFin) are the resolution authorities responsible in Germany. For reasons of simplification, the following discussion does not distinguish between the SRB and BaFin.

When will a bank resolution or creditor participation occur?

The resolution authority may order certain resolution measures if all of the following conditions are met:

What measures can the resolution authority take?

If all the conditions for resolution are met, the resolution authority can take extensive measures, even before insolvency, which can have a negative impact on shareholders and creditors of the bank, such as:

The resolution authority may officially order adjustment of the terms of the financial instruments issued by the bank and the claims against it, e.g. the due date or the interest rate may be changed to the disadvantage of the creditor. Furthermore, payment and delivery obligations may be modified, including temporary suspension. Creditors' termination and other decision-making rights resulting from financial instruments or claims may also be temporarily suspended.

Under what circumstances am I affected by a bail-in as a creditor?

Whether you, as a creditor, are affected by the bail-in depends on the scope of the measure ordered and on the classification of your financial instrument or claim. Within the framework of a bail-in, financial instruments and receivables are divided into different classes and drawn upon according to a legal order of precedence for liability (liability cascade).

The following principles apply to the involvement of shareholders and creditors of the respective classes: Only when a class of liabilities has been drawn upon in its entirety but is not sufficient to compensate adequately for losses to stabilise the bank can the next class of liabilities in the liability cascade be written off or converted.

Certain types of financial instruments and receivables are exempted from bail-ins by law. For example, deposits covered by the statutory deposit guarantee scheme up to EUR 100,000 and asset-backed liabilities (e.g. Pfandbriefe [covered bonds]).In the liability cascade of a bank established in Germany, a distinction must be made between the following classes:

2.  Thereafter, the creditors of the additional tier 1 capital are called on (holders of unsecured perpetual subordinated debt securities and silent participations with conversion or depreciation clauses, which are subordinated to supplementary capital instruments).

4.  Next in the liability cascade are the unsecured subordinated financial instruments and receivables that do not meet the requirements for additional tier 1 capital or supplementary capital.

5.  These are followed in the liability cascade by unsecured non-subordinated financial instruments and non-structured debt instruments1. This class only includes debt securities that

a) were issued before 21 July 2018 and do not constitute money market instruments or structured products; or

b) have been issued since 21 July 2018, have a contractual term of at least one year, do not constitute structured products and where the contractual terms and, in the case of an obligation to publish a prospectus, the prospectus expressly note that they rank below the liabilities of the following class (6).

This class is also referred to as "non-preferential non-subordinate" (or senior non-preferred).

6. The next level in the liability cascade includes the following unsecured liabilities:

a) Debt instruments not allocable to class (5), for example debt instruments issued since 21 July 2018 and that do not have the lower rank reference required for classification in class (5).
b) Structured, unsecured financial instruments and receivables (such as certificates on stock indices or receivables from derivatives). In such cases, the amount of the repayment or interest payment depends on an uncertain future event or settlement is effected in a manner other than by payment of money.
c) This also includes deposits of more than EUR 100,000 from companies not allocable to class (7).

Unlike class (5), this class is also referred to as preferential non-subordinate (or senior preferred).

7. Finally, deposits from private individuals, microenterprises, small, and medium-sized enterprises may also be drawn upon to the extent that they exceed the statutory guarantee of deposits of EUR 100,000 (other preferential deposits).

The simplified order of liability shown on the last page (in the direction of the arrow starting with the common equity tier 1 capital) therefore applies, whereby a lower class is only drawn upon to cover the losses if drawing upon the preceding classes is not sufficient (see point (Liability cascade simplified presentation)").

The resolution authority may deviate from this principle in individual cases.

1 Debt instruments are bearer bonds, negotiable bonds and similar rights that, by their nature, can be traded on the capital market, and registered bonds and promissory note loans, insofar as they do not qualify as preferential deposits in class (6) or as covered deposits that are excluded from write-off and conversion.

What consequences can the resolution measures have for me as a creditor?

If the resolution authority orders or implements measures under these rules, the creditor may not terminate the financial instruments or claims or assert any other contractual rights solely on the basis of this measure. This applies as long as the bank fulfils its principal obligations under the terms of the financial instruments and receivables, including payment and performance obligations.

If the resolution authority implements the measures described, it is possible that the invested capital of the shareholders and creditors be lost in its entirety. Shareholders and creditors of financial instruments and receivables may therefore lose the entire purchase price they spent on the acquisition of financial instruments and receivables as well as other costs associated with the purchase.

If a bank undergoes resolution procedures, shareholders and creditors should not receive worse treatment than that as part of normal insolvency procedures of the bank. However, if the resolution measure leads to a shareholder or creditor being in a worse position than it would have been as part of regular insolvency proceedings against the bank, the shareholder or creditor is entitled to claim for compensation against the fund set up for resolution purposes (restructuring fund or Single Resolution Fund, SRF). Should a claim for compensation arise against the SRF, there is a risk that the resulting payments will be made much later than would have been the case if the bank had duly fulfilled its contractual obligations.

These instruments typically have a higher return than bank deposits, but bear a higher risk of default in the event of insolvency or if resolution measures are implemented due to the lower rank and generally non-existent deposit guarantee. Unlike bank deposits, these instruments can generally be traded on a secondary market, but it is possible that a buyer or seller cannot be found on the secondary market (liquidity risk) and the market price can change to the disadvantage of the investor (price change rate risk).

For details on opportunities and risks, please refer to the product documentation of the specific financial instrument.

Where can I find out more?

The BaFin has published information on the resolution of banks and insurance companies and the potential loss-sharing of customers: 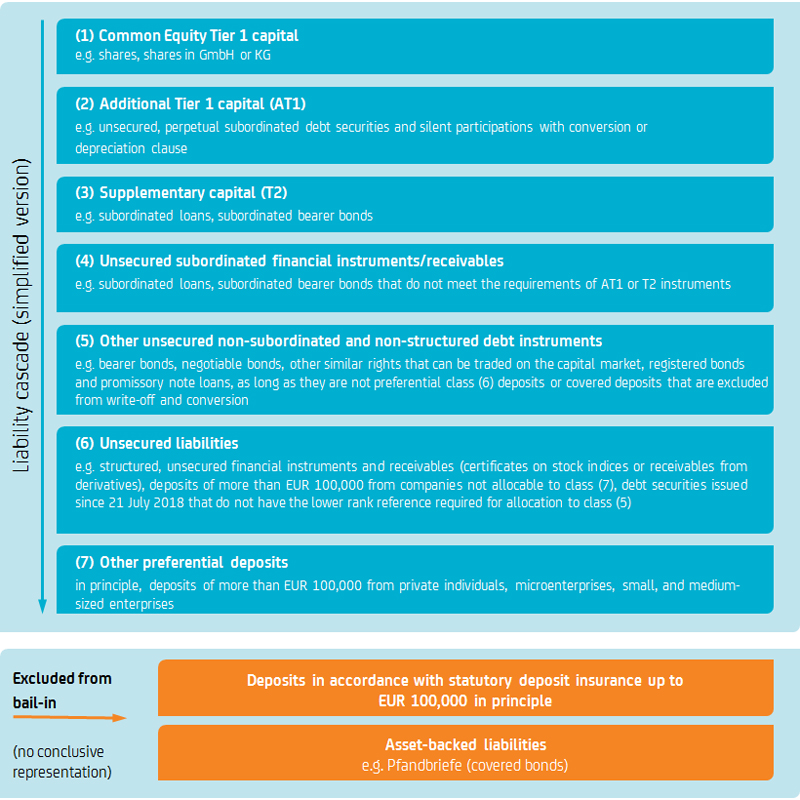 This website is addressed to residents of the Czech Republic only. In other jurisdictions the furnishing of any such information may be restricted by law. The information on this site is not intended for persons or entities resident, located or registered in jurisdictions that restrict the distribution of such material. Consequently, the information on this site does not constitute, and may not be used for the purposes of an offer or invitation to acquire or sell any securities to any person in any jurisdiction:

In particular, the information on this website is not intended to and does not constitute an offer or invitation to acquire or sell securities to persons in the United Kingdom. Accordingly, any offer from any such person will not be accepted.

Therefore, the securities listed in the following information may not be sold to U.S. nationals or otherwise be transferred to the United States unless the relevant transaction is not subject to registration requirements under U.S. law.

Quotes and market data of  exchange Bats (Bats Trading Limited) is not intended and my not be used by persons or entities for commercial investment activities or acting as a principal, officer, partner, employee, contractor or agent of any business, or on behalf of any other individual or business.

For complete information on the function, structure and risks and opportunities of the security, potential investors should read the Prospectus, which contains the Base Prospects , Supplements and Final Terms, carefully before making any investment decision.

The approval of the prospectus is not to be understood as a recommendation to purchase these securities of UniCredit Bank AG. Only the Base Prospectus including any supplements  and Final Terms shall prevail. These documents may be obtained from UniCredit Bank AG, Department MMS6, Am Eisbach 4, D-80538 Munich or may be downloaded here.